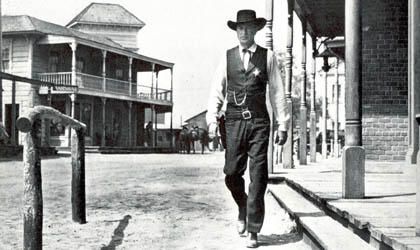 High Noon is my favorite western. Marshal Will Kane (Gary Cooper) on his wedding day, receives a telegram that a convicted murderer he sent to prison has been released and is arriving on the noon train. The ex-con has nefarious purposes! Three men with evil intent are at the train station waiting for the ex-con to arrive on the noon train. The Marshal, although he attempts to get support from the townsmen, soon realizes he will face the murderer and his three nefarious friends alone. I like the word nefarious.  🙂   The Marshal’s lovely wife (Grace Kelly) wants to leave town immediately and let the new marshal handle the miscreants. However, the new marshal won’t arrive until the following day. So, Will Kane , even though he did resign as marshal, puts on his badge again and meets the villains alone.

Really good film. If you like westerns and you haven’t seen this one, you should see it. 🙂

“Praise be to the God and Father of our Lord Jesus Christ, the Father of compassion and the God of all comfort, who comforts us in all our troubles, so that we can comfort those in any trouble with the comfort  we ourselves receive from God.” II Corinthians 1:3 & 4 ~NIV