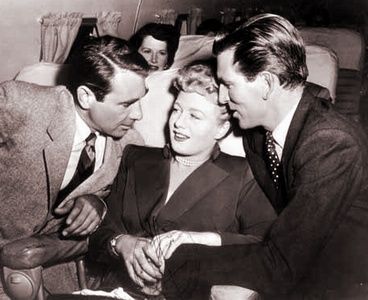 David Trask (Gary Merrill) is leaving his wife. As he prepares to leave on a flight, he meets and becomes friendly with three other passengers, Dr. Robert Fortness (Michael Rennie), Eddie Hoke (Keenan Wynn) and Binky Gay (Shelley Winters). They are certainly an interesting group of people, each with a story to tell. The plane takes off in the rain and when the flight encounters lightening it has to land unexpectedly, so the passengers and crew spend the night together in a small airport. The following day, the flight takes to the air but encounters unexpected obstacles and crashes killing eighteen passengers with three passengers surviving. David Trask is one of those survivors and decides to visit the families of the three people he befriended on the flight.

This is a good movie and even though it is a tragedy, in the end I had such a good feeling. David Trask was certainly brave, not really knowing how each family was going to respond to his interference into their lives. It did all work out in the end and there were a few unsung heroes in the story.