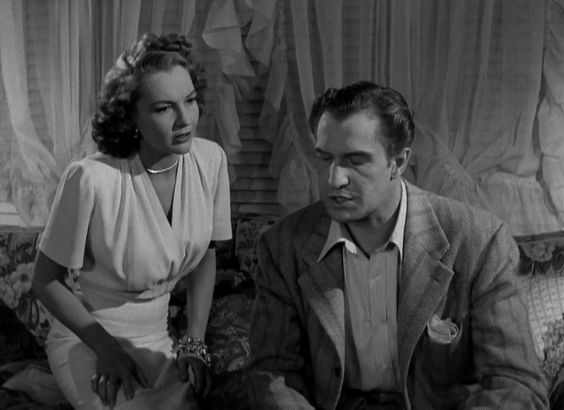 Janet Stewart (Anabel Shaw) is eagerly waiting for her husband, Lt. Paul Stewart, (Frank Latimore), at a hotel. He’s been a prisoner of war. She thought  he was dead, but now she’s been notified he is alive. He is late arriving and Janet falls asleep in the hotel room. She has a bad dream which awakens her. Shortly after she is awake, she witnesses a man kill his wife in the next room. When her husband Paul arrives and finds her in a shocked condition, he telephones for the doctor. The doctor contacts Dr. Richard Cross, (Vincent Price) a psychiatrist. Dr. Cross is the same man who killed his wife in the next room. Of course, Dr. Cross’s nurse (Lynn Bari) is also the woman he loves.

Oh my word! This is a good film. I like Noir films though. What Dr. Cross put Janet though was horrible. I was cheering for Janet the entire film, hoping she would live through the terrible ordeal. Her husband Paul was so worried about his wife. I was sitting on the edge of my seat wanting the film to hurry so I could see the ending. Vincent Price is not my favorite actor, but he was in some interesting films! Highly recommended.