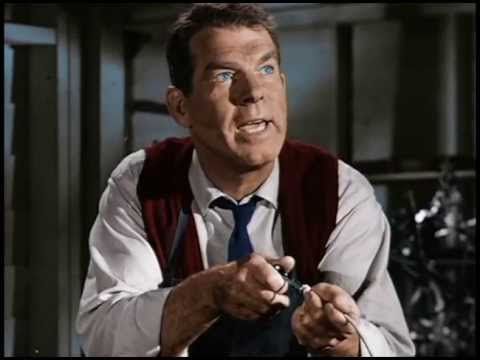 Quite unexpectedly, on his wedding night, Professor Brainard (Fred MacMurray) invents flubber! That’s right, there’s an explosion in his lab, he’s knocked unconscious and when he wakes up, he discovers he not only missed his wedding for the third time, but he’s invented flubber! I would describe flubber as an anti-gravity substance. And, there you have it! I loved Professor Brainard and his dog Charlie! Charlie seems to know everything about science that the Professor knows. Brainard talks to Charlie and tells him everything. I love Charlie’s ears. They go up and down and he tilts his head from side to side. Charlie’s a great dog.  🙂  They couldn’t have chosen a better actor for the role of Professor Brainard. But! The good but absent-minded Professor, wants to convince his fiancé, Betsy, (Nancy Olson) he’s invented flubber. She just happens to be mad at him because he stood her up at the altar three times! She’s dating another man (Elliott Reid)!!! Not good! Underneath that mild mannered demeaner of a Professor, there lurks a desperate heart. He’s out to win his girl back and he’s going to use flubber to achieve this. So! He puts flubber in shoes and in the engine of his Model T car. Good times ensue with a whole lotta chuckles!!! This is one of my favorite classic, Disney films.  🙂

“Peace I leave with you; My peace I give you. I do not give to you as the world gives. Do not let your hearts be troubled and do not be afraid.” John 14:27, NIV