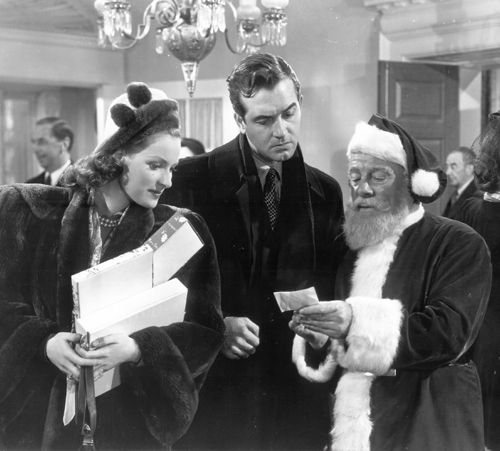 Soon, Doris’s daughter Susan meets Kris Kringle and decides he really is Santa Claus. Doris has not raised her daughter to believe in Santa, fairy tales or such nonsense. While Doris tries to explain to Susan, Kris Kringle isn’t Santa, Doris sends for Kris. However, while speaking with Kris, he insists he is Santa Claus! So, Doris checks his employment information and discovers Kris Kringle really believes he is Santa! Well, this leads to a questionable psychiatric evaluation by a questionable psychologist (Porter Hall). The nefarious psychologist isn’t a nice guy and Kris Kringle ends up in Bellevue! How rude!!! The case goes to court, Fred Gailey is representing Kris and that’s where the fun really begins.  🙂

I don’t have a favorite Christmas movie, but I think this film is very cute. I think Rick and I watch it every year.

I like the costumes Maureen O’Hara wears in the film. Shoulder pads are obviously in style! She looks great. She’s a business woman and dresses as such. She’s divorced and a single mother.

Do you have a favorite Christmas film??? Let me know.  🙂