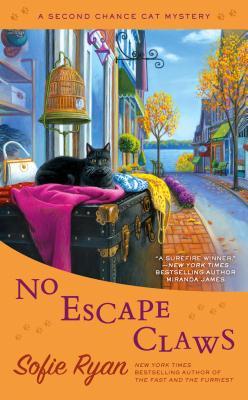 “It’s fall in North Harbor, Maine, where Sarah Grayson owns a charming secondhand shop and sells lovingly, refurbished items of all kinds. The shop is always bustling — and not just because a quirky team of senior-citizen detectives works out of it and manages to get in even more trouble than Sarah’s rough-and-tumble rescue cat, Elvis.”

“A cold case heats up when young Mallory Pearson appears at the shop. Mallory’s father is in prison for negligence after her stepmother’s mysterious death, but Mallory believes he is innocent and asks the in-house detectives to take on the case. With Sarah and Elvis lending a paw, the detectives decide to try to give Mallory’s father a second chance of his own.” ~Berkley Prime Crime

This was a good mystery. The only problem ~ it seemed to drag at times and as such, it didn’t keep my attention. The story had some good characters. I liked Mallory. She was loyal to her dad and believed in his innocence throughout the mystery. The interesting senior citizens who investigate the case are certainly entertaining and I found myself chuckling on several occasions as I read the book. Sarah and her brother were an entertaining pair.  🙂  And! The coffin was a nice touch!

The author’s description of Alfred Peterson, the licensed private investigator, made me smile.

“Alfred Peterson was a little bald man with wire framed glasses and pants that were generally hiked up to his armpits.”

The mystery was good and certainly kept me guessing. I had two suspects and one of my suspects was the guilty party. 4 **** stars! I plan to read the books in this series, again in the future.

A BIG thanks to Berkley Prime Crime!

Announcing the winner of the drawing ~

MacKenzie! You won! CONGRATULATIONS! You can find MacKenzie at ~

One thought on “No Escape Claws by Sofie Ryan”