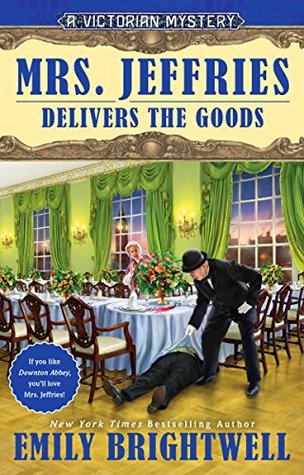 “A member of the house staff is attending a ball at the Wrexley hotel when panic hits the dance floor. The entire party looks on as Stephen Bremmer goes into spasms while seated at the head table. It doesn’t take long for a doctor to deduce that the man has been poisoned.” ~ Berkley Prime Crime

Stephen is a rotten bounder and no one liked him. Everyone seemed to have a motive for murder, which made for a challenging mystery to solve.

Mrs. Jeffries and friends are ready for a new investigation. And! There were indicators in the story that pointed to the killer, but I didn’t solve the mystery. After I finished the book and thought about the story, I had an ah ha moment. As Inspector Witherspoon and Constable Barnes interview witnesses and potential suspects, Mrs. Jeffries and the household along with their dependable contacts in the community, conduct their own investigation. Mrs. Jeffries has a great network of informed citizens!

A BIG thanks to Berkley Prime Crime!

Announcing the winner of the drawing ~  🙂

3 thoughts on “Mrs. Jeffries Delivers the Goods by Emily Brightwell”