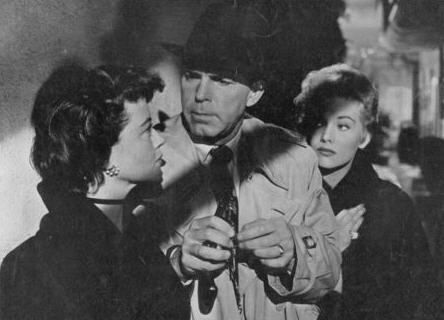 Lone McLane (Kim Novak) is the girlfriend of a bank robber. Her boyfriend and his partner stole $210,000 from a bank and the boyfriend killed a man during the heist. After the robbery Lone’s boyfriend disappears. So, Paul Sheridan (Fred MacMurray) and Rick McCallister (Philip Carey) stake out Lone’s apartment hoping her boyfriend will contact her and they can arrest him. Paul and Lone meet and fall in love. Lone presents Paul with an idea to steal the stolen money and get as far away as possible. After some struggle within himself, he agrees and the two think of and carry out a plan. Ann Stewart (Dorothy Malone) is Lone’s neighbor and stumbles into the nefarious plan Lone and Paul have concocted. As such, she becomes a witness. While Rick McCallister and their boss (E. G. Marshall) are trying to puzzle out why the stake isn’t going as planned ~ the stake out and the plan to steal the money are both rapidly unraveling, Ann is in danger.

Really good noir! This was the first time I’d seen Kim Novak in a film.