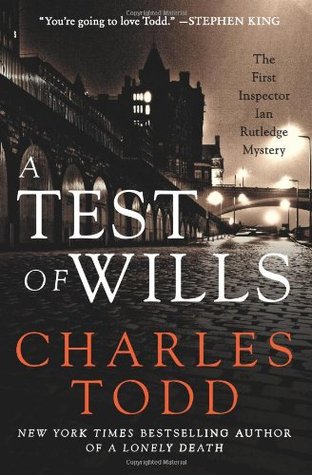 Charles Todd is the pen name for a mother/son writing duo. This team writes The Bess Crawford Mysteries, which I have thoroughly enjoyed. Bess Crawford is a battlefield nurse during World War l and she solves mysteries. In the last Bess Crawford, the war ended. With the ending of said war, I don’t know what Charles Todd is going to do with Bess Crawford, so I decided it was a good time to start reading The Ian Rutledge Mysteries.

In A Test of Wills, Inspector Ian Rutledge has returned from France, shell shocked, with a voice in his head. Rutledge is investigating the death of Colonel Harris. He was murdered. His body discovered in a meadow. According to the inhabitants of the community, Colonel Harris was a perfect person. He didn’t have enemies. Everyone liked him. He was just a real nice guy. Mmmm. The Colonel’s ward was soon to marry Captain Mark Wilson. With the death of the Colonel, the wedding is to be postponed. As the result of an argument the night before AND! more than one person clearly seeing the Captain in the meadow, near the time of the Colonel’s death, the Captain is a suspect. The community insists the Captain is innocent and they are convinced Mavers murdered the Colonel. Inspector Rutledge, to save his sanity, is determined to work through this difficult mystery and solve it. And he did! I thought this mystery was intriguing and at times creepy. At times, I thought the community knew who the killer was and joined together to hide his or her identity. I was very suspicious of the Captain and the Colonel’s ward. I thought they were in cahoots together, however, I didn’t know what they were cahooting about. There seemed to be so many suspicious characters. It kept me interested. I did not see the ending coming. It was a complete surprise. Good mystery!  4 **** stars! I will continue reading this series.  🙂

5 thoughts on “A Test of Wills by Charles Todd”