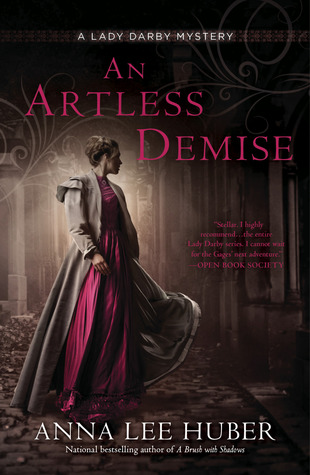 “November 1831. After fleeing London in infamy more than two years prior, Lady Kiera Darby’s return to the city is anything but mundane. A gang of body snatchers is arrested on suspicion of killing people from the streets and selling their bodies to medical schools. Then Kiera’s past rises up to haunt her. All of London is horrified by the evidence that body snatchers are at work in their city. The terrified populace hovers on a knife’s edge, ready to take their enmity out on any likely suspect. When Kiera receives a letter of blackmail, threatening to divulge details about her late husband’s involvement with the body snatchers and wrongfully implicate her, she begins to apprehend just how precarious her situation is, not only to herself, but also her new husband and investigative partner, Sebastian Gage, and their unborn child.” ~Berkley Prime Crime

An Artless Demise is the first book I’ve read by Anna Lee Huber. I’ve seen her books on the shelves of our local bookstore many times, and have contemplated reading one, so, when my bookish friends at Berkley Prime Crime offered me the opportunity to read one of her mysteries, I went with it.

London is scared and aghast when it is discovered criminals are killing people and selling their bodies to medical schools. Kiera’s deceased husband was involved in these atrocities and Kiera’s past comes back to haunt her during this time of fear. Kiera and her new husband Gage are expecting their first child and Kiera fears for her baby and her husband. It’s a stressful time for the young couple. She receives a blackmail letter which could send shivers up anyone’s spine and the young heir of a prestigious family is discovered murdered. The heir’s father asks Gage and Kiera to investigate his son’s death and find the killer. As tensions rise in London Gage and Kiera must stop a killer before there is another victim.

This story could have been macabre or morbid with gory details, however, the author did a wonderful job writing the mystery with a very minimal amount of gruesome details. Kiera is a lovely lady with a considerable amount of strength, however, I don’t think she realizes how strong she is. Anyone who knows her, would soon realize she couldn’t possible be guilty of the heinous crimes her former husband was involved in. Gage and her friends are completely supportive and assist her in any way they are able. I thought Gage was an interesting man. He’s a “take charge” kind of guy while loving and tender toward Kiera. The streets of London and the escalating mobs are well described.

If you enjoy historical mystery, this might be the mystery for you. 3.5 *** stars!

Announcing the winner of the giveaway ~

“Come to Me, all you who are weary and burdened, and I will give you rest. Take My yoke upon you and learn from Me, for I am gentle and humble in heart, and you will find rest for your souls. For My yoke is easy and My burden is light.” Matthew 11:28 – 30 ~ NIV