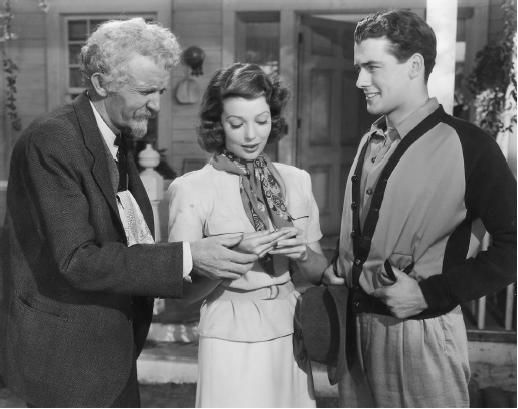 I watched this film because I read on the internet somewhere that Walter Brennan won an Academy Award for Best Supporting Actor in his role in this movie. I was very curious. He also won Best Supporting Actor in his role in The Westerner (1940) and Come And Get It (1936). Apparently he is one of three actors who have won three Academy Awards! How about that!

In this film, two families, the Dillons and the Goodwins, refuse to have any dealings with one another because of an unfortunate incident that happened at the beginning of the Civil War. Now seventy years later, these two families are still not speaking to one another. Both families raise Thoroughbreds and are involved in horse racing in Kentucky. Jack Dillon (Richard Greene) wants to train horses, but his dad wants him in the banking business. Jack agrees to try banking, however, Jack and his father have a disagreement and Jack leaves banking and his home and begins to train horses. The first horse he trains belongs to Sally Goodwin (Loretta Young) and her crusty but lovable uncle, Peter Goodwin (Walter Brennan). Sally doesn’t know she has hired a Dillon to train her horse. Jack and Sally fall in love, but there are obstacles along the way, one being, he needs to tell her he’s a Dillon.

Loretta Young is so feminine and lovely in this film. Her and her uncle really know horses! Walter Brennan does a great job as Uncle Peter. He yells frequently but he’s so loveable! If he says, a horse will win the race, a horse WILL win the race. And! Richard Greene is a great trainer and so much in love with our lovely leading lady. He struggles because he’s a Dillon and she’s a Goodwin.

Have a great weekend!  🙂