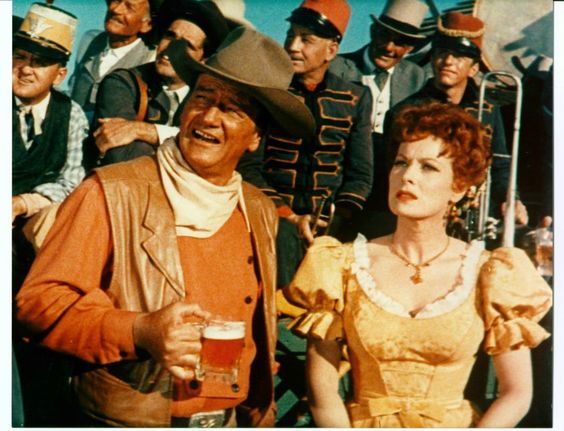 George Washington McLintock (John Wayne) is his name,  🙂  and he’s the wealthiest man in the territory. He’s respected by many. His daughter, Rebecca (Stephanie Powers) is returning from college and he’s eager to see her. Shortly before his daughter’s return on the train, his wife, Katherine (Maureen O’Hara) arrives in town. She says, she’s there to meet their daughter and take her back east. Katherine left McLintock a couple of years earlier and never said why she was leaving. They were never divorced. While he’s dealing with a headstrong wife and the return of his equally headstrong daughter, he’s also dealing with farmers moving into the territory, Indians who are about to be moved to a reservation and a government agent who seems nefarious in his purposes.

This film is a comedy, romance and a western all rolled into one. We have good guys, bad guys, strong women and wild men. There are fist fights, gunfire, brawls and everything you might possibly want in a western. However, it’s not my favorite John Wayne film. I had a coworker who loved this film. It was her favorite John Wayne movie. She thought it was hilarious!  🙂  I didn’t really like it. My favorite film with John Wayne is Rooster Cogburn (1975). However, if you love the old west with a whole lotta shenananigans and strong characters with happy endings, this might be the movie for you.  🙂  Enjoy!