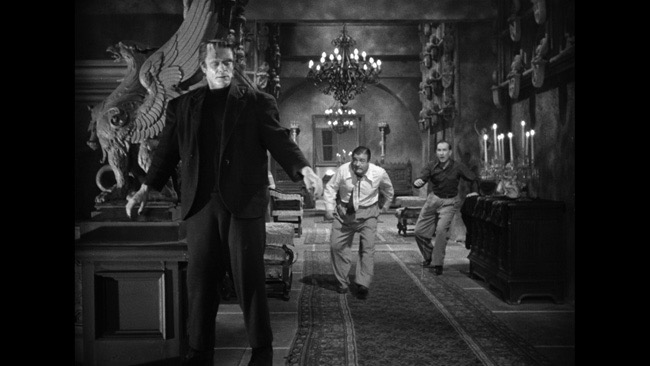 As my neighbor was known to say, “Never in all my born days!” I’ve watched this film many times and I’ve mentioned it on my blog, in the past, but I’ve never featured it on Classic Movie Friday. I know you’ve been waiting with great expectancy. *haha*  🙂  The day has finally arrived! *applause applause*

It may sound a little crazy and maybe out of character for me, but I really like this film! I’m not one to enjoy monster films or horror or even ghosts, but I do like this movie! This film has a great cast! And! I love the chase scene in the castle! Let me start at the beginning ~

Wilbur Grey (Lou Costello) and Chick Young (Bud Abbott) work as freight handlers. Chick Young is cranky, mean and bossy. Wilbur is a nice guy. Wilbur has a girlfriend, Sandra (Lenore Aubert). Chick can’t understand why a lovely lady like Sandra enjoys the company of Wilbur. She wants Wilbur’s brain! Well, McDougal (Frank Ferguson) arrives at the freight business at the same time Sandra arrives. McDougal tells Sandra he has recently purchased the remains of Count Dracula (Bela Lugosi) and the Frankenstein monster (Glenn Strange). The very large freight has arrived and McDougal is wanting our hero’s to deliver his freight to the House of Horrors immediately. Meanwhile, Wilbur is handling a phone call from a man, Lawrence Talbot, (Lon Chaney Jr.) who is warning him not to deliver the shipments. Well! The freight is delivered, the monster and Dracula are missing. Dracula has revived the weakened monster and exited the House of Horrors!  McDougal believes Chick and Wilbur stole them. And! The Wolfman (Lon Chaney Jr.) is loose. Talbot turns into the wolf when the moon is full. I might add, there are a LOT of full moons in this story!  🙂  Dracula and Sandra are going to perform an operation to put Wilbur’s brain into the Frankenstein monster! McDougal is attacked, an insurance adjuster, Joan Raymond (Jane Randolph) is curious and snooping around! Hilarity ensues!