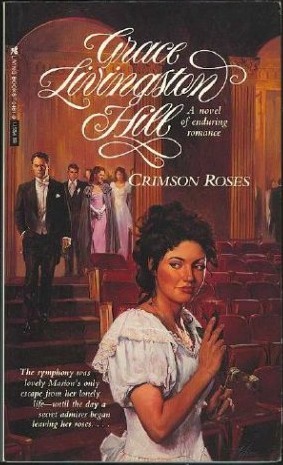 In Crimson Roses, the author introduces us to Marion Warren and her family of origin. Her mother died a couple of years before the story begins. Tom and Jennie are her brother and sister-in-law. Marion’s father is very ill and dying. The doctor and the family know that their dad doesn’t have long to live. Marion has willingly and lovingly been nursing her father while he has been ill, never regretting a moment of her time caring for her father. Marion and her father have always been close and enjoyed books together.

“He and she had always understood one another and had had the same dreams and ambitions. He had encouraged her in taking more time for reading and study . . . ” (p.2)

“He had talked with her of life and what we were put on this earth to do. He had hunted out books to please and interest her. She had read aloud to him for hours at a time.” (p. 2)

Marion felt the loss when her father passed away.

After the death of her father, the reader continues to get to know Marion. Throughout the story the reader continually knows her thoughts and feelings. She is a lovely woman and misses her father deeply. She’s timid and I would describe her as innocent.

When her brother, Tom decides to sell the family home, he doesn’t expect any opposition from her. Tom and his wife Jennie are surprised when Marion finds a job and a room to rent, remaining in the city, instead of moving to Vermont with them. Jennie is sharp and condescending in her speech and shockingly hostile toward Marion.

After Marion has been living alone and working, she learns of a concert series. She has a little money saved and decides to attend the concert series. Marion loves music.

“She listened as if she were out in a tide of melody floating, floating with the melody where it would, her soul palpitating, quivering, feeling every suggestion the music conveyed, seeing every fair picture that it carried on its breath.” (p. 158)

Unexpectedly, each time Marion arrives at the concert series, Marion finds a dark, crimson rose on her seat. After some investigation, she decides to keep the roses. She treasures each rose she receives, always wondering who could be leaving the roses.

This is a lovely romance. It’s sweet and romantic. Throughout the story, Marion struggles with her thoughts. She wants to have charitable or kind thoughts for people who are ugly to her. She also struggles with her social standing. She believes she isn’t good enough to be loved by or marry a man of wealth.

This is a faith-based story and I did enjoy it, very much. I would recommend it for anyone who enjoys romance.