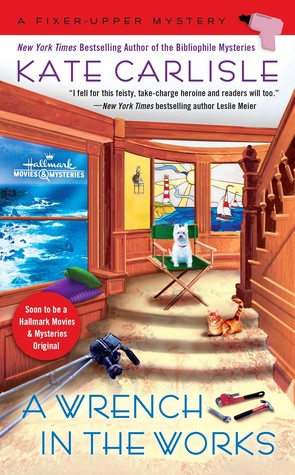 A BIG thank-you to Berkley Prime Crime for mailing me a print copy of the book!  🙂

This is a fun mystery and the sixth in the series. I enjoyed it. Chloe, sweet and a little naïve, left Lighthouse Cove after high school heading for Hollywood. And, she has done well. She’s the star of a home improvement show on the Home Builder’s Network. Lighthouse Cove has an abundance of Victorian homes to be refurbished and renovated. So, the tv show decides to travel to Lighthouse Cove and renovate one of the Victorian homes. Shannon Hammer, Chloe’s older sister, is successful in her own right. She renovates these amazing homes. The tv show plans to include Shannon on several episodes. However, the tv shows executive producer is discovered dead! Not good! The entire crew is under suspicion.

Shannon is a take charge kind of girl. She has pluck. She loves her sister. And! Shannon has an interesting boyfriend!

“Mac was tall, dark, and gorgeous and had an air of danger simmering just beneath the surface.”

Now, how’s that for a description??? He’s an ex-Navy SEAL and now he’s a successful author. Mmmm. I think Shannon is a blessed lady. *ahem*

This is a very engaging mystery and had me guessing. I thought the story’s characters were friendly and relatable. I felt like I was part of the crew, working alongside everyone and having amiable conversations with Shannon and Chloe. There were a few interesting men. Oops!? Did I say that out loud???  🙂  The plot was good and the story moved along at a good pace. It was very well-written. 5 ***** stars!