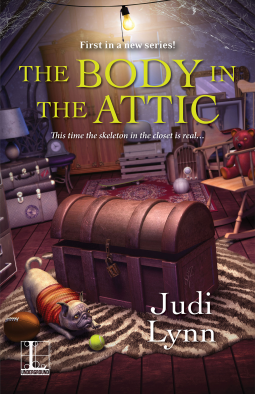 I’ve always been intrigued when mysteries are in an attic or a secret room or a hidden stairway. So, when I read the title of this book, I decided to read it. I mean really, The Body In The Attic! What more could a mystery reader want? And! It’s the first in a new series.

Jazzi and her cousin Jerod flip houses, so much of the book is describing the work they do. They purchase the home of Cal Juniper and have every intention of flipping it when they are finished cleaning out the debris and doing the work to ready it for a sale. While checking out the attic, a body is discovered in a trunk! It is soon revealed, it is the remains of Jazzi’s Aunt Lynda who went missing twenty-six years earlier!

In the beginning the story intrigued me. This mystery is a very cold case. I wasn’t certain the detective in the story was going to be able to solve it. He persevered. And! He had Jazzi’s support. As the story continued, I was a little disappointed. There is food and family and friends gatherings. The work on the flip house is described, but the mystery didn’t make it for me.

After a break-up with his girlfriend, Jazzi becomes involved with Ansel. I thought the relationship was superficial, to be sure. There were several adult comments in the book, I thought were unnecessary, so I would not recommend the mystery for teens. 3 *** stars!

I received a complimentary copy of this book from Kensington through NetGalley. Opinions expressed in this review are my own.

2 thoughts on “The Body In The Attic by Judi Lynn”